Already in the middle of November I had to book the Tongariro Northern Circuit for a hike in february. This hiking trail in the group of the Great Walks offers huts and tent places for overnight stays, which were previously fully booked. But this also came to me because of the weather. There were still minus degrees in the elevations 🙂

Starting from the small village of Whakapapa (pronounced Fackapapa), it was interrupted for 5 hours by a grassy bushy landscape (Tussock) with rocks that lie between the two last volcanoes of a volcano – Mount Ruapehu and Mount Ngauruhoe. The weather was so bad that persistent fog blocked the view. Sometimes these 30m were just enough to see the next staff marking the way. After a small excursion on a side road, where I “naturally” met again German, I then reached the Waihohonu Hut. This newly built cottage was the most comfortable I stayed in. Huts of the Great Walks in New Zealand offer mattresses multi-bed rooms and cooking facilities (gas) in the common room. Dishes, sleeping bags and of course food brings everyone with and also takes away his garbage again.

There was heavy rain from noon until the next morning, so we all got up early to get to the next hut before the rain. & Nbsp; With uncooled plastic poncho I went before 8:00 o’clock, then march by 2.5 m fog and drizzle with a bit wind on heights through a mixture of grassbush and stone landscape. So I was already around 10: 00h in the Oturere Hut. The day I spent somehow, & nbsp; Chess playing with the sons of a lovely French family and skat playing with 2 Berliners who all had the same route.

Worn from the sun in the bright blue sky, this should be the most beautiful day of the weather, experiences and memories. I broke up with the older 12-year-old son of the French family, who was, of course, far too old to go with his family. 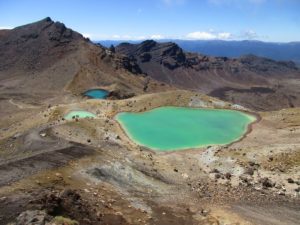 The trail led across the foothills of the lava rock to the Emerald Lakes. This way uphill was viewed from above as a ray of the lava flow of a broken-down volcano. In the meantime it smelt of sulfur, which evaporated from the mountain. When we reached the lakes there was a great view. The lakes have a really crazy color.

From there it went steeply up to the Red Crater. At the top there was an incredible color game. 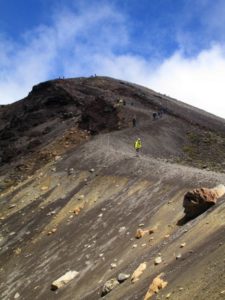 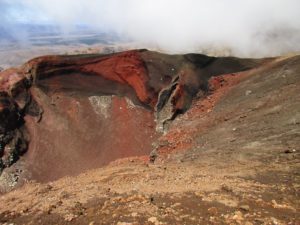 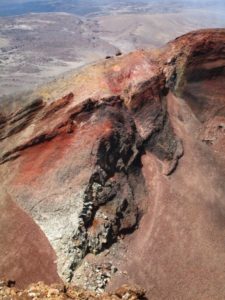 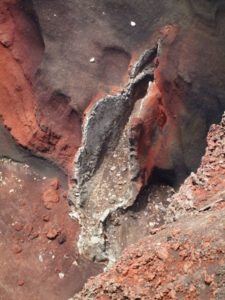 We then waited there for the boy’s family when I saw the Blue Lake in the distance. I had to go back and down the mountain again to check if the lake was really blue 🙂 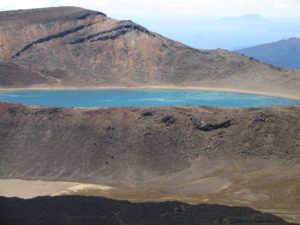 The return journey and another climb has already paid off for this view alone. I just took 15min on the way and just enjoyed. 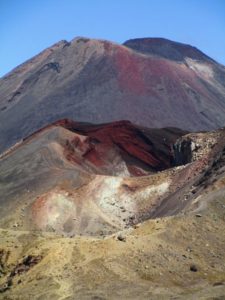 In the foreground the Red Crater and in the background the Mount Ngauruhoe, an active volcano. The last outbreak, however, was in 1975. This volcano served as “Lord of the Rings” and “The Hobbit” as a destiny mountain in Mordor and here the ring of Frodo was melted.

Motivated, I went a second time the steep way up to the Red Crater. The path leads along the edge and is about 10m wide – on the left and right it goes down steeply. 10m sounds a lot, since the wind is very strong there, the national park staff (ranger, hut operator) & nbsp; Recommendations on whether the route is dangerous or not. Later I learned in the next hut that a delicate little lady had to hold on to the pile of stones in order not to be blown away, after which the wind had already shifted her 1m. Phew, how dangerous. The day before, the weather was so bad that the rangers have advised against going the way. On the other side, the mountain descended down to a plain called the South Craters. On the way I wondered about a hiker walking barefoot over these stony paths. Did he train for the next Hobbit movie?

On the southern crater stood a sign “Ngauruhoe Summit” – a climb to the volcano peak. Since I was already 4h, and the steep ascent and descent 3h should last, I made a first break, whether I was still fit enough. Lots of sugar, water and proteins and go it off, but without backpack. The climb was really exhausting and partly over gravel I walked on a steep slope two steps before and a half back. 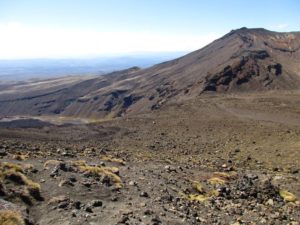 On one third of the route times a look back thrown down. In the meantime, a three-party hiker joined me and we climbed together this Mount Doom of Murdor. For a long time I have the impression that I would like to climb a volcano to look over the edge of the crater. I can now also kick off this wish from my (bucket list).

On top it was a great view into the crater and outlook over the surrounding landscape. 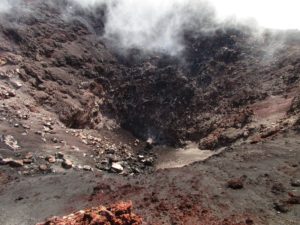 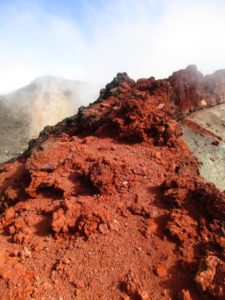 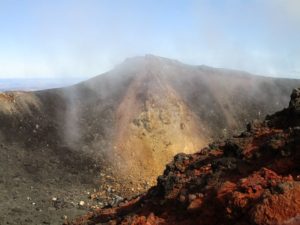 Crazy, isn’t it? These colors are incredible and almost surreal, as not from this world. 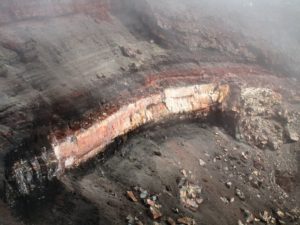 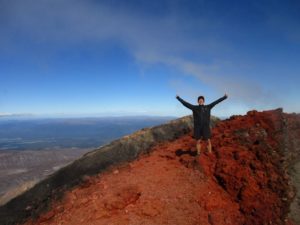 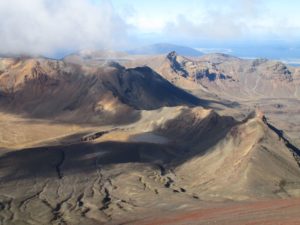 And what have I found on the top of the crater rim: 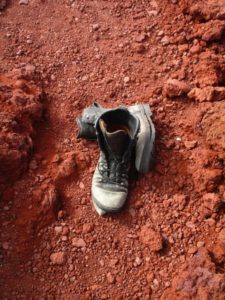 no words, but no hobbitt training

After descent from the mount doom it was still about 1.5 hours to the Mangatepopo Hut, where I then fell asleep after 9h hike – what a day! I have no idea whence I had so euphorized the strength, as in the happiness of the feelings this mood lasted over the next days.

The last section of the trail took about 3 hours back through the valley across a bus to the village of Whakapapa. The vegetation was lined with shrubs and shrubs of trees and trees, which grew higher and lower (altitude). Still a small detour to a waterfall and then I was at the end of this hike.

After the first farewell thoughts from the South Island of Neusselands and the approaching departure, this was an experience that impressed me the following days lasting. The next few days I had to go for a round in the morning and it felt like a need. Only when I then 3 days later again a strenuous 4h hike up and downhill made, also a bit of peace had come. And these colorful pictures I will always carry in me.

All pictures of the hike: